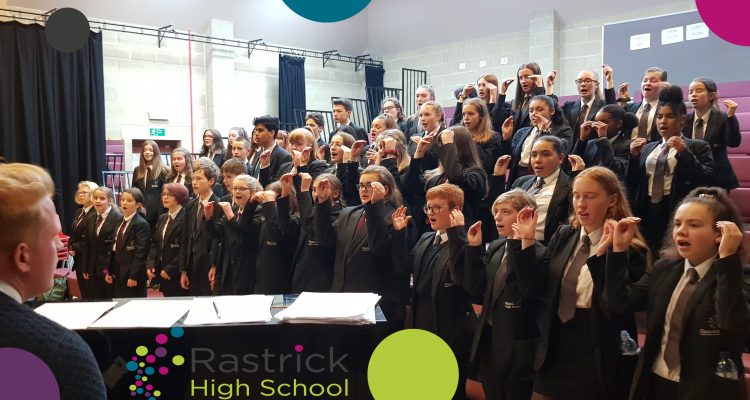 Members of a Yorkshire school’s student choir are preparing for the performance of a lifetime after being chosen to sing at the Royal Albert Hall in London.

More than 130 students from Rastrick High School’s non-audition choir will perform at the Music for Youth Proms at the world-famous music venue on 12 November.

The school’s choir is the only one from Yorkshire chosen to perform at this year’s event.

The Music for Youth Proms are a celebration of the entire Music for Youth annual season, with the event’s website stating the concert ‘showcases high quality performances from some of the UK’s most creative, innovative and energetic young musicians.’

“To reach this point, the choir first performed at the Calderdale Regional Music Festival which was hosted at our school earlier this year. These festivals took place all over the UK, and mentors from Music for Youth chose their favourite performances to take part in the Music for Youth national festival in July, held at Birmingham Symphony Hall.

“From there, we were thrilled to be chosen to go forward to the Royal Albert Hall for the Music for Youth Proms in November.”

At the concert, the choir will perform Wings by Birdy, which has been arranged by the school’s Lower Brass tutor and will be sung with sign language throughout. Students will also perform When You Believe from the film The Prince of Egypt, as well as performing with all of this year’s Music for Youth participants as a massed ensemble.

“It’s all systems go now as the choir will be rehearsing two to three times a week in the lead up to the concert to make sure everything is to our usual exceptional standards and they’re ready for the performance of a lifetime.

“Being chosen to perform at the Royal Albert Hall, one of the world’s most prestigious venues, is an outstanding achievement and is testament to the dedication of our students in their study of music and also our commitment to it as an essential part of our curriculum at Rastrick High School.

Rastrick High School is further investing in its students, school and its environment. Over the…

Clifton Rangers YFC is looking to expand their girls and boys football teams. They’re one…

Our website contains a range of useful information. If you cannot find the answer to your query, please get in touch.
CONTACT US
Copyright Rastrick High School. 2022 - All Rights Reserved.